ANNAGELIFFE, a parish, in the barony of UPPER LOUGHTEE, county of CAVAN, and province of ULSTER, 1 mile (N. E. by E.) from Cavan, on the road from that place to Virginia; containing 4341 inhabitants. It comprises, according to the Ordnance survey, 8260¼ statute acres, of which 5096 are applotted under the tithe act. The living is a vicarage, in the diocese of Kilmore, forming, with that of Urney, the union of Urney and Annageliffe, in the patronage of the Bishop; the rectory is impropriate in the Representatives of Richard, Earl of Westmeath. The tithes amount to £217. 16. 11½., of which £62. 2. 2½. is payable to the impropriator, and £155. 14. 9. to the vicar. In the R. C. divisions this parish forms part of the union or district of Urney, or, as it is more commonly called, Cavan: the chapel is a large building, situated at Stragolla. There are a parochial school, and a school on the townland of Curlurgan; also four hedge schools. 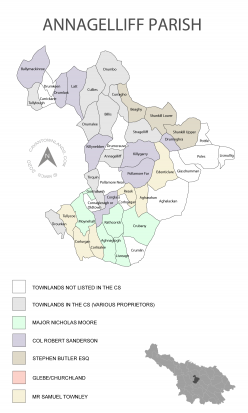 Towns and Townlands in Annagelliff