ANNAGH, or BELTURBET, a parish, partly in the barony of LOWER LOUGHTEE, but chiefly in that of TULLAGHGARVEY, county of CAVAN, and province of ULSTER, on the road from Ballyconnell to Cavan; containing, with the greater part of the market and post-town of Belturbet, 12,269 inhabitants. It comprises, according to the Ordnance survey, 19,145¼ statute acres, of which 12,340 are in Tullaghgarvey; about 16,000 are arable and pasture, 2000 are bog and waste, 300 are woodland, and 200 are common: of its entire area, 14,936 acres are applotted under the tithe act. The principal seats are Castle Saunderson, the residence of A. Saunderson, Esq.; Erne Hill, of G. M. Knipe, Esq.; Clover Hill, of J. Saunderson, Esq.; and Red Hill, of -White, Esq. The living is a rectory and vicarage, in the diocese of Kilmore, and in the patronage of Lord Farnham: the tithes amount to £384. 4. 7½. The church is a handsome edifice, for the repairs and enlargement of which the late Board of First Fruits granted £2600, in 1812 and 1814; and the Ecclesiastical Commissioners have recently granted £112 for its further repair. The glebe-house was purchased by aid of a loan of £844, in 1810, from the same Board; the glebe comprises 400 acres. In 1813, forty-seven townlands of the parish were disunited, to form the perpetual cure of Killoughter. This parish is divided into the two R. C. districts of Annagh West and Annagh East, or Killoughter, the former containing a chapel at Drumalee, and the latter at Red Hill. There are two places of worship for Wesleyan Methodists, one of which belongs to the Primitive class. A school is supported by the Trustees of Erasmus Smith’s charity; and there are schools at Drumlaney, Killoughter, and Drumloor; also an infants’ and two other schools, besides six private pay schools. The ruins of the old church yet exist. See BELTURBET.
KILLOUGHTER, a parish, in the barony of TULLAGHGARVEY, county of CAVAN, and province of ULSTER,6 miles (N. N. E.) from Belturbet, on the road from that place to Cootehill; containing 6130 inhabitants. It comprises 7633 statute acres of arable and pasture land, except about 250 acres of waste and bog. The living is a perpetual curacy, in the diocese of Kilmore, formed out of the parish of Annagh in 1813, and in the gift of the Incumbent of that parish: the tithes amount to £14, and the Ecclesiastical Commissioners have granted an augmentation of £20 per annum. The church is a neat plain building, with a square tower. The glebe-house was built by aid of a gift of £450 and a loan of £50 from the late Board of First Fruits, in 1822, and has a glebe of 16a. 3r. The R. C. parish is co- extensive with that of the Established Church, and has a chapel at Red Hill. There is a meeting-house for Primitive Methodists. About 25 children are educated in the parochial school, and 460 in ten private schools. 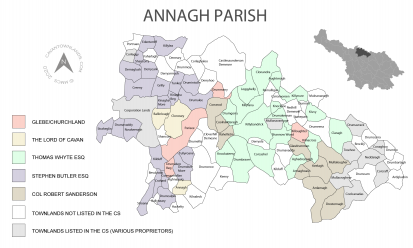 Towns and Townlands in Annagh