BALLINTEMPLE, a parish, in the barony of CLONMAHON, county of CAVAN, and province of ULSTER, 6¾ miles (S. by W.) from Cavan, containing, with part of the town of Ballinagh, 4982 inhabitants. This parish is situated on the road from Virginia to Killyshandra, and comprises, according to the Ordnance survey, including 54¼ under water, 10,657¾ statute acres, of which 8074 are applotted under the tithe act. It is a vicarage, in the diocese of Kilmore, and forms part of the union and corps of the deanery of Kilmore; the rectory is impropriate in the representatives of Richard, Earl of Westmeath. The tithes amount to £259, of which £104 is payable to the impropriators, and the remainder to the vicar. The church was erected in 1821 by aid of a loan of £1200 from the late Board of First Fruits. The glebe comprises 103a. 1r. 29p. of profitable land, valued at £87. 13. 10. per annum. The R. C. parish is co-extensive with that of the Established Church; there are three chapels, called respectively the upper and lower chapels and the chapel of ease. The parochial school and two others afford instruction to about 180 boys and 60 girls; and there are also three private pay schools, in which are about 170 boys and 50 girls. See BALLINAGH. 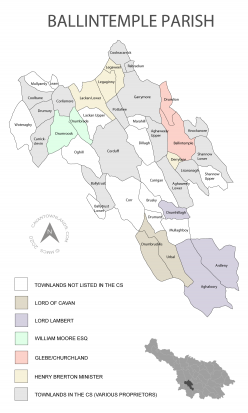 Towns and Townlands in Ballintemple