BALLYMACHUGH, a parish, in the barony of CLONMAHON, county of CAVAN, and province of ULSTER, 6¼ miles (E. N. E.) from Granard; containing 3428 inhabitants. This parish is situated on the borders of Lough Sheelan, on the confines of the counties of Longford and Meath, and comprises, according to the Ordnance survey, 7728½ statute acres, of which 1827¾ are water. The system of agriculture is improving; oats and potatoes are the principal crops. The gentlemen’s seats are Arley Cottage, that of Lord Farnham, and Fortland, of W. Gosling, Esq. Petty sessions for the district are held in the school-house every third Saturday. It is a vicarage, in the diocese of Ardagh, and is part of the union of Granard; the rectory is impropriate in the Misses Blundell: the tithes amount to £265. 16. 11., of which £118.3.1. is payable to the impropriators, and £147. 13. 10. to the vicar. The church, a plain building, has been recently enlarged at an expense of £800. The glebe comprises 11 acres, valued at £1.16.0 per acre. The R. C. parish is co-extensive with that of the Established Church; the chapel is a large plain building recently erected. The parochial school for boys and girls is aided by donations from Lord Farnham and the incumbent; at Ballynany there is a school, and one at Orley is supported by Lord Farnham, by whom the school-house was built; in these schools are about 280 boys and 230 girls. There is also a Sunday school at Orley. A dispensary is also supported in the customary manner. On an island in the lake are the ruins of Crover castle, and on another, those of an old church covered with ivy. 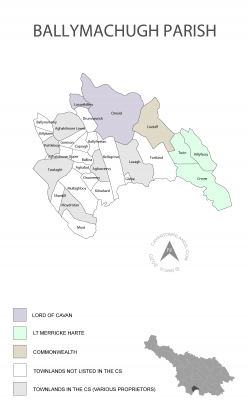 Towns and Townlands in Ballymachugh