CASTLETERRA, a parish, in the barony of Upper Loughtee, county of Cavan, and province of Ulster; containing, with the post-town of Ballyhaise, 6503 inhabitants. This parish is situated on the road from Cavan to Cootehill, and comprises, according to the Ordnance survey, 9980¾ statute acres (including 151½ under water), of which 9526 are applotted under the tithe act; about 900 acres are woodland, mountain, or bog, and the remainder is arable or pasture. There is an iron mine, which has never been worked; and a new road is being made through the parish from Ballyhaise to Cavan. The principal seats are Ballyhaise House, the residence of W. Humphreys, Esq.: Lisnagowan, of Mrs. Humphreys; and the glebe-house, of the Rev. G. Knox. The living is a rectory and vicarage, in the diocese of Kilmore, and in the patronage of the Bishop: the tithes amount to £288.10.0 The church is a handsome building, repaired in 1819 by aid of a loan of £1200 from the late Board of First Fruits. There is a glebe-house, with a glebe of 195 acres. The R. C. parish is co-extensive with that of the Established Church, and has chapels at Ballyhaise, Castleterra, and Butler’s-bridge, of which Ballyhaise chapel, built in 1810, cost £400; and Castleterra, built in 1829 cost £650. The parochial school-house is built of stone, and cost £270, one-half of which was paid out of the lord-lieutenant’s school fund, the other half by subscriptions. It is under the patronage of W. Humphreys, Esq., and is aided by an annual donation from the incumbent, who also partially maintains three other schools: there are national schools at Ballyhaise and Butlerstown. About 260 boys and 240 girls are educated in these schools; and about 60 boys and 100 girls are educated in private schools. In 1777, Brockhill Newburgh, Esq., bequeathed £10 annually, charged on his estate at Ballyhaise, for the repair of the church; also £10 annually out of the Redhills estate, for bread to be distributed weekly among the poor of the parish. About two miles from Ballyhaise there is a chalybeate spring. See Ballyhaise. 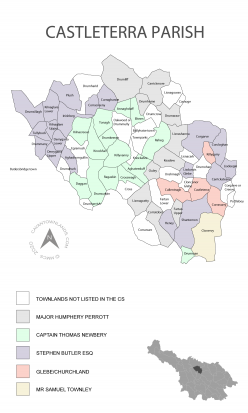 Towns and Townlands in Castleterra