DRUMGOON, a parish, partly in the barony of TULLAGHGARVEY, but chiefly in that of CLONKEE, county of CAVAN, and province of ULSTER, on the road from Kingscourt to Clones; containing with the post-town of Cootehill, 12,029 inhabitants. It comprises, according to the Ordnance survey, 15,475 statute acres, including 604 under water, of which 8122 are in Clonkee. Slate and lead ore abound here, but have been only partially worked; and the linen manufacture was formerly carried on to a great extent, but of late it has much declined: there is a large flour-mill and bakery. Bellamont Forest, the seat of C. Coote, Esq., stands in a forest on the banks of a beautiful lake adjoining the demesne of Lord Cremorne. The living is a rectory and vicarage, in the diocese of Kilmore, and in the patronage of the Rev. J. Hamilton; the tithes amount to £513.9.9. The glebe house was built by aid of a gift of £375 from the late Board of First Fruits, in 1820, and was rebuilt by a loan of £1384.12.0 and a gift of £92.6.0 from that board in 1831: the glebe comprises 343 acres. The church, situated in Cootehill, is a large handsome structure with a tower and spire, rebuilt by aid of a loan of £3200, in 1817, from the late Board. There is also a chapel of ease, a neat plain edifice, erected in 1834, about three miles distant from the church. The RC. parish is co-extensive with that of the Established Church, and contains three chapels, one at Cootehill, another about a mile from it and a third at Muddabawn. There are two Presbyterian meeting-houses, one in connection with the Synod of Ulster, of the third class, and the other with the Seceding Synod, of the second class; also places of worship for the Society of Friends, Moravians, and the Weslyan Methodists. There are thirteen public schools, in which are about 1080, and fourteen private schools, in which are about 640 children; also an infants’ school and Sunday schools held in each meeting-house. A Society for the sale of blankets and clothing at half price is supported by ladies. The Bible Society has a repository here. Remains of an old encampment exist at Drumgoon; there are also several Danish raths, or forts. Large horns of the elk are often found, a pair of which ornament the porch of the glebe. house. The remains of the old parish church are on the townland of Drumgoon. 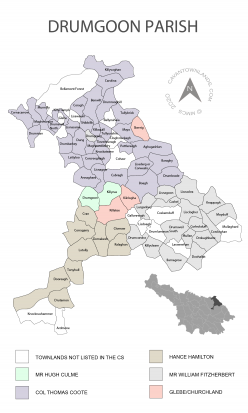 Towns and Townlands in Drumgoon