DRUMLANE, a parish, in the barony of LOWER LOUGHTEE, county of CAVAN, and province of ULSTER, on the road from Clones to Ballyconnell; containing, with part of the post-town of Belturbet, 8547 inhabitants. A monastery was founded here in the 6th century, by St. Edan, Bishop of Ferns, which became subject to the abbey of St. Mary at Kells. The cemetery was formerly the place of interment of the chieftains of Breffny, and is still a favourite place of burial. Within its limits are the remains of an ancient round tower, built of limestone and red grit. According to the Ordnance survey, the parish comprises 20,066¼ statute acres, of which 3074 are water, and 16,583 are applotted under the tithe act. Of these, about 400 are bog, 50 woodland, and the remainder arable or pasture. The living is a vicarage, in the diocese of Kilmore, and in the patronage of the Bishop; the rectory is appropriate to the vicars choral of Christ-Church cathedral, Dublin. The tithes amount to £500, of which two-thirds are payable to the appropriators, and one-third to the vicar. There is a glebe-house, which was built by a loan of £675 from the late Board of First Fruits, in 1819, and a glebe of 340 statute acres. The church is a neat building with a square tower, erected in 1819 by a loan of £1500 from the late Board of First Fruits. In the R. C. divisions this parish forms the two unions or districts of Drumlane and Milltown, and has chapels at Staghell and Milltown. Here is a place of worship for Primitive Methodists. About 500 children are educated in seven public, and the same number in seven private, schools. 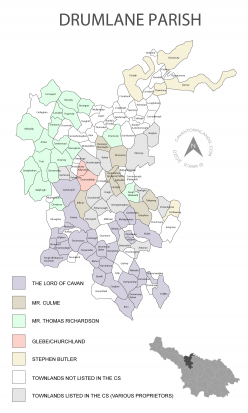 Towns and Townlands in Drumlane