DRUMLOMAN, or DRUMLUMNUM, a parish, in the barony of CLONMAHON, county of CAVAN, and province of ULSTER, 2½ miles (E. by N.) from Granard; containing 8007 inhabitants. It comprises, according to the Ordnance survey, 17,147¾ statute acres, of which 1003 are water, including 541¼ in Lough Sheelin, 140¼ in Lough Gowna, and 121 in Lough Kinale. It is in the diocese of Ardagh, and is a vicarage, forming part of the union of Granard; the rectory is impropriate in the representatives of the late Dean Blundell. The tithes amount to £526. 3. 1., of which £221. 10. 9. is payable to the impropriators, and £304. 12. 3. to the incumbent. The Ecclesiastical Commissioners have lately granted £161 for repairing the church. The glebe comprises 150 acres, valued at £234. 8. per annum. There are four schools, one of which is supported by Lord Farnham, and in which about 900 children are taught; also two private schools, in which are about 170 children. Here was anciently an hospital, the endowments of which were granted by Jas. I. to Sir Edw. Moore. 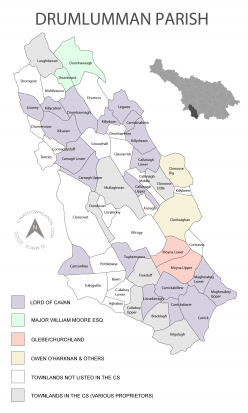 Thesis on the 1821 Census for the parish of Drumlumman (Drumlomman).

END_OF_DOCUMENT_TOKEN_TO_BE_REPLACED

Drumloman Parish, notes on the 1821 Census

END_OF_DOCUMENT_TOKEN_TO_BE_REPLACED

Towns and Townlands in Drumlumman