DRUMREILLY, a parish, partly in the barony of TULLAGHAGH, county of CAVAN, and province of ULSTER, and partly in that of DROMAHAIRE, but chiefly in that of CARRIGALLEN, county of LEITRIM, and province of CONNAUGHT, 2½ miles (E. by N.) from Ballinamore, on the road to Killeshandra; containing 9278 inhabitants. This parish was separated from Templeport by act of council in 1835, and comprises 4373 statute acres, as applotted under the tithe act, besides a great portion of mountain. There are large grazing farms, and a vast quantity of bog. Limestone is found. here. The parish is intersected by Lake Gorradise, on which stands Gorradise, the residence of W. C. Percy, Esq., and Bush Hill, of C. Gerard, Esq; and in the vicinity is Corduff, the property of W. Penrose, Esq. There is a small island in the lake, called Robbers island. The living is a vicarage, in the diocese of Kilmore, and in the patronage of the Bishop: the rectory is appropriate to the see. The tithes amount to £300, of which £200 is payable to the bishop, and £100 to the vicar. There is no glebe-house: the glebe comprises 365 acres, of which 282 are profitable land, valued at £322. 15. 6½. per annum. The church is a plain structure, in good repair, built in 1737, by William Gore, Esq. In the R. C. divisions it is divided into three parochial benefices, Upper Drumreilly, Lower Drumreilly, and Ballinagleragh, containing three chapels, besides a fourth annexed to Lower Drumreilly, called the mountain chapel. About 500 children are educated in seven public, and 110 in two private schools; there is also a Sunday school. 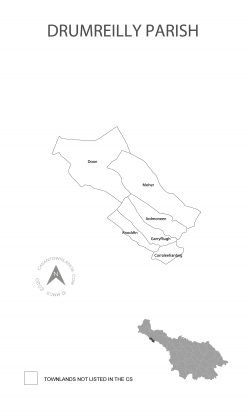 Towns and Townlands in Drumreilly