DRUNG, a parish, in the barony of TULLAGHGARVEY, county of CAVAN, and province of ULSTER, 5 miles (E. N. E.) from Cavan, on the road from that place to Cootehill; containing 6015 inhabitants. According to the Ordnance survey it comprises 11,475 statute acres, including 78 of water. Here are several quarries of good building stone, and it is supposed that various minerals exist, but no mines have been worked. The principal seats are Rakenny, the residence of T. S. Clements, Esq., and Fort Lodge, of J. Smith, Esq. The living is a vicarage, in the diocese of Kilmore, united from time immemorial to that of Laragh, and in the patronage of the Bishop; the rectory is impropriate in the Marquess of Westmeath. The tithes amount to £475. 15. ll½., of which £202. 4. 7½. is payable to the impropriator, and £273. 11. 4½. to the vicar; the entire tithes of the benefice amount to £610. 18. 6½. There is a glebe-house, with several glebes, comprising 695 acres, and valued at £606. 16. 3. per annum. The church is a handsome building, lately repaired by a grant of £130 from the Ecclesiastical Commissioners. The R.C. parish is co-extensive with that of the Established Church, and contains two chapels, one at Dunnannah and the other at Bannow. About 350 children are educated in three public, and 320 in seven private schools, besides those who are taught in three Sunday schools. There are several raths, one of which is called Fort William, part of King William’s army having occupied it after encamping near Ballyhaise on a spot since called Camp Hill. See BALLINECARGY. 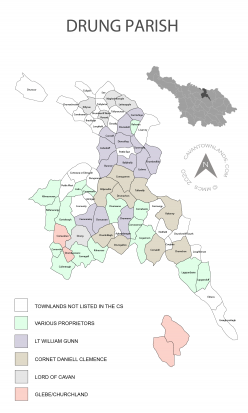 Towns and Townlands in Drung