ENNISKEEN, a parish, partly in the baronies of LOWER KELLS and LOWER SLANE, county of MEATH, and province of LEINSTER, but chiefly in the barony of CLONKEE, county of CAVAN, and province of ULSTER, on the road from Carrickmacross to Bailieborough; containing, with the post-town of Kingscourt (which is described under its own head), 10,368 inhabitants. This place, anciently the principal seat of the Danes, was called Dunaree, and still retains that name; it is surrounded by Danish forts, and on the summits of the neighbouring hills great quantities of money and of ancient military weapons have been dug up at various times. The parish comprises 28,814 statute acres, of which about 500 are woodland, from 200 to 300 bog, and the remainder under tillage; the system of agriculture is greatly improved, and great quantities of bog and waste land have been reclaimed. Limestone abounds; there are excellent quarries of every kind of building stone, and near the rock at Carrickleck is very superior freestone, which is extensively worked for flagstones and pillars of large dimensions. On the estate of Lord Gormanstown, in the Meath district, are coal, lead and iron ore, but none is raised at present; a coal mine and an alabaster quarry were formerly worked, but have been discontinued. The principal seats are Cabra castle, the handsome residence and richly planted demesne of Col. Pratt; Corinsica, of J. Pratt, Esq.; Northlands, of the Very Rev. Dean Adams; Newcastle, of J. Smith, Esq.; Woodford, of J, Armstrong, Esq.; Lisnaboe, of -Jackson, Esq.; Plantation, of Irwin, Esq.; Larchfield, of W. Pratt, Esq.; and Cornakill, of -Moore, Esq. An annual fair is held at Muff on the 21st of August, and there are several at Kingscourt, noticed in the account of that town, where petty sessions are also held. The living is a perpetual curacy, in the diocese of Meath, and in the patronage of the Bishop, to whom the rectory is appropriate: the tithes amount to £900. The glebe-house is a neat residence, erected by a gift of £450 and a loan of £50 from the late Board of First Fruits, in 1831; the glebe comprises 28½ acres. The church, at Kingscourt, is a neat plain edifice, to the repair of which the Eeclesiastical Commissioners have recently granted £173. The R, C. parish is co-extensive with that of the Established Church, and is called Kingscourt; the chapel in that town is a spacious and handsome edifice, in the later English style, and there is also a chapel at Muff. There is a place of worship for Presbyterians in connection with the Synod of Ulster, of the third class, and one for Wesleyan Methodists. About, 130 children are taught in the public schools, and there are 16 private schools, in which are about 960 children. Between Bailieborough and Kingscourt, about two miles from the former, is a pool called Lough-on-Leighaghs, or the ‘healing lake’, which is much resorted to by patient. afflicted with scorbutic complaints; it is situated on the summit of a mountain, rising, according to the Ordnance survey, 1116 feet, above the level of the sea. On a lofty eminence, about a mile from the lake, is a remarkable cairn; and about, two miles from Kingscourt, on the Dublin road, is the singularly beautiful and romantic glen of Cabra. There are ruins of Muff and Cabra castles, and some remains of an old bridge. 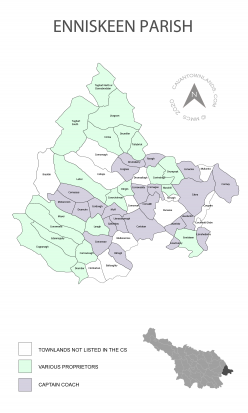 Towns and Townlands in Enniskeen