KILBRIDE, or CASTLECORR, a parish, partly in the barony of DEMIFORE, county of MEATH, and province of LEINSTER, but chiefly in the barony of CLONMAHON, county of CAVAN, and province of ULSTER, on the road from Mount-Nugent to Oldcastle ; containing, with the post-town of Mount-Nugent, 4658 inhabitants. It comprises 8777 statute acres, as applotted under the tithe act, of which about three-fifths are arable, a tenth bog, and the remainder pasture: limestone is abundant. The principal seats are Bobsgrove, the residence of C. E. J. Nugent, Esq. ; Roebuck, of W. Reilly, Esq. ; and Castlecorr, of W. Webb, Esq. The living is a rectory, in the diocese of Meath, the presentation to which is in dispute between the Crown and Lord Dunsany- : the tithes amount to £415. 9. 9. The church was built in 1809, and has been recently repaired, for which the Ecclesiastical Commissioners granted 4157. The glebe- house is supposed to have been erected before the Reformation; the glebe comprises 212 acres. In the R. C. divisions this parish forms part of the union or district of Killeagh and Kilbride, and has a chapel at Mount- Nugent. About 70 children are educated in a public school, for which the house and an acre of land were given by Mr. Nugent; and about 350 children are taught in five private schools.—See MOUNT-NUGENT. 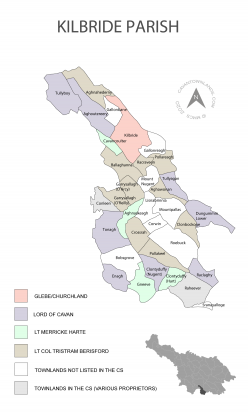 Towns and Townlands in Kilbride