KILDALLON, a parish, in the barony of TULLOGHONOHO, county of CAVAN, and province of ULSTER, 3 miles (N.) from Killeshandra, on the road from that place to Ballyconnell; containing 4246 inhabitants. It comprises, according to the Ordnance survey, 11,989¼ statute acres, of which 211½ are water; 3233 acres are applotted under the tithe act, and there is a large tract of waste land, called Ballyheady moor; the land is chiefly cultivated by spade husbandry. The principal seats are Greenville, the residence of Perrott Sheraten, Esq.; Aughabawn, of the Rev. J. Vernon; Carn Cottage, of Capt. Clifford; Mackenwood, of M. Galbraith, Esq.; Belberry, of Urwin, Esq.; and Carn, of J. Benison, Esq. The living is a rectory and vicarage, in the diocese of Kilmore, and in the gift of the Bishop: the tithes amount to £203. 1. 6½. The church is a handsome building, with a tower, erected in 1814, for which the late Board of First Fruits granted a loan of £1000. The same Board, in 1821, gave £100 and lent £1200 for the erection of the glebe-house: the glebes comprise 339 acres. In the R. C. divisions this parish is the head of a union or district, comprising also the parish of Tomeegan, and containing a chapel in each. The chapel here is a large thatched building, with a neatly planted burial-ground. At Croghan is a Presbyterian meeting-house, of the third class, in connection with the Synod of Ulster. About 560 children are educated in eight public, and 170 in two private, schools. On the summit of the hill of Carn is a heap of stones surrounded by a Danish rath; and at Drumboo is a holy well, at which patrons have been held. 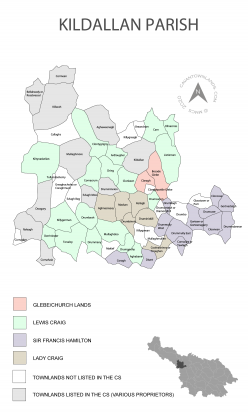 Towns and Townlands in Kildallan