KILLERSHERDINY, or KILDRUMSHERDAN, a parish, in the barony of TULLAGHGARVEY, county of CAVAN, and province of ULSTER, 21/2 miles (S. W.) from Cootehill, on the road to Cavan; containing 6997 inhabitants. It is also called Kilsherdany, and comprises, according to the Ordnance survey, 16,6181/2 statute acres, of which 15,801 are applotted under the tithe act; about 4860 are arable, 8940 are meadow and pasture, 320 woodland, 1071/2 water, and the remainder bog; the system of agriculture is improved. There are several quarries of common whin-stone, which is raised for building and for repairing the roads. The principal seats are Annalee, the residence of M. Murphy, Esq.; Fort William, of T. Coote, Esq.; Eragle Cottage, of T. Hamilton Ennis, Esq.; Laurel Lodge, of the Rev. J. Adams; Retreat, of C. J. Adams, Esq.; Drummilton, of G. Cooney, Esq.; and Tullyvin House, of Maxwell J. Boyle, Esq. A remnant of the linen manufacture is still carried on in the parish, and there are several corn-mills, of which one belonging to Mr. Townley, of Dundalk, is very large. A lead mine, the property of T. Burrowes, Esq., of Stradone House, was formerly worked by the Irish Mining Company, but, being found unprofitable, has been discontinued. There are charters extant for four annual fairs, but one only is held in the village of Tullyvin, on the 4th of May, for cattle. The living is a vicarage, in the diocese of Kilmore, and in the patronage of the Bishop; the rectory is impropriate in the representatives of Richard, Earl of Westmeath: the tithes amount to £480, of which £230 is payable to the impropriator, and £250 to the vicar. The church, a neat plain edifice, was built in 1800, and the glebe-house in 1816: to the former the late Board of First Fruits gave £500, and to the latter £100, and a loan of £1125: the glebe comprises 285 acres. The R. C. parish is co- extensive with that of the Established Church: the chapel was built in 1825, at an expense of £700. Nearly 500 children are taught in four public schools, of which the parochial schools are supported by the vicar; and one at Tullyvin is endowed with £40 per annum late currency, and a house for the master, by the late W. Moore, Esq., of that place. There are also six private schools, in which are about 240 children. There are several forts in the parish, supposed by some to be Danish, but by others to have been raised by the native Irish as a defence against those invaders; and on the several hills on which they are situated ancient coins have been found. On the demesne of Tullyvin is an. ancient vault, in which are 23 coffins, containing the remains of deceased members of the families of Moore and Boyle; and on the townland of Curravilla is a chalybeate spring, now in disuse.
ASHFIELD, a parish, in the barony of TULLAGHGARVEY, county of CAVAN, and province of ULSTER, ½ a mile (S. W.) from Cootehill, on the road to Belturbet; containing 3013 inhabitants. It formerly constituted part of the parish of Killersherdiny, from which it was separated in 1799; and comprises 4426 acres, as applotted under the tithe act, and valued at about £4006 per annum. The land is in general good, and there is very little waste; the system of agriculture is slowly improving. The manufacture of linen for broad sheeting is carried on to a considerable extent. Ashfield Lodge, the seat of Col. Clements, is beautifully situated on an eminence within view of the church, beneath which swiftly flows the Cootehill river, a tributary to Lough Erne, and is surrounded with extensive plantations. Fort Henry, formerly a seat of the Clements family, is now that of the Rev. J. Thompson. The living is a perpetual curacy, in the diocese of Kilmore, and in the patronage of the Vicar of Killersherdiny, with which parish the tithes are included and are payable to the vicar: the perpetual curate has a fixed annual income of £100, of which £50 is payable by the Ecclesiastical Commissioners. The church is a handsome edifice, with a lofty spire, occupying a very elevated site; it was built by aid of a gift of £500 from the late Board of First Fruits, in 1795, and, in 1818, the Board also granted £500, of which one half was a gift and the other a loan. The glebe-house was built by a gift of £450 and a loan of £50 from the same Board, in 1812; the glebe comprises 20 acres. In the R. C. divisions this parish forms part of the union or district of Killersherdiny: the chapel is situated at Drummurry. Besides the parochial school, there is one at Doohurrick under the patronage of Mrs. Clements; also three private pay schools. 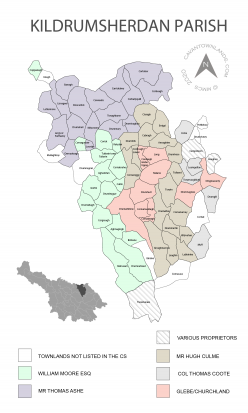 Towns and Townlands in Kildrumsherdan