KILLESANDRA, a market and post-town, and a parish, in the barony of TULLOGHONOHO, county of CAVAN, and province of ULSTER, 9 miles (W.) from Cavan, and 64 (N. W.) from Dublin, on the road to Ballinamore; containing, with the district parishes of Arvagh and Scrabby, 14,532 inhabitants, of which number 1137 are in the town. This town, which is situated near the river Croghan and contains about 200 houses, is neatly built, and has a cheerful and thriving appearance. The linen manufacture, which is carried on extensively in the neighbourhood, has contributed greatly to its prosperity, and, upon an average, coarse linens are sold in its market to the amount of £1500 weekly. The market is on Wednesday, and is abundantly supplied with provisions; and fairs are held on Jan. 28th, March 28th, May 9th, June 22nd, July 15th, the second Wednesday in August (O. S.), Sept. 28th, and Nov. 8th. The market-house is a very neat and well-arranged building. A chief constabulary police force is stationed in the town; a manorial court is held occasionally, and petty sessions every alternate Thursday. The parish comprises, according to the Ordnance survey (including a detached portion of 3231/2 acres), 22,241 statute acres; 500 are woodland, and 1212 water, of which latter 74 are in Lough Oughtee. The surface is boldly undulating, and, in the southern part, rises into mountainous elevations, above which Bruce Hill is pre-eminent; and not far from the town is the steep mountain of Corhill. The lands are chiefly under tillage; the soil is tolerably fertile, but the system of agriculture is very indifferent; there is a large extent of bog. Freestone is quarried for building, and in several parts are indications of coal, but no attempt has been yet made to work it. The river Croghan, in the lower part of the parish, winds through a delightful tract of country into the magnificent lakes of Killesandra. Adjoining the town is Castle Hamilton, the seat of R. H. Southwell, Esq., a spacious mansion surrounded by an extensive and highly embellished demesne. The living is a rectory and vicarage, in the diocese of Kilmore, and in the patronage of the Provost and Fellows of Trinity College, Dublin: the tithes amount to £660. The parochial church is a very ancient structure, but in a state of dilapidation. The glebe-house has a glebe of 500 acres attached to it. There is a chapel of ease at Derrylane. The R. C. parish is co-extensive with the ancient parish of Killesandra; there are two chapels, situated in the town and at Corronee; there is also a place of worship for Wesleyan Methodists in the town. About 630 children are taught in seven public schools, of which two are supported by Lord Farnham; and there are four private schools, in which are about 230 children. Mrs. Jackson bequeathed £10 per annum to be divided by the rector among ten poor housekeepers. There are numerous raths in the parish. Dr. Hales, author of a work on chronology, and other scientific works, was rector of this parish.

ARVAGH, a market and post-town, and a parish, in the barony of TULLOGHONOHO, county of CAVAN, and province of ULSTER, 10¾ miles (S. W.) from Cavan, and, by way of that town, 66 miles (N. W. by W.) from Dublin; containing 4580 inhabitants, of which number, 422 are in the town. This parish is situated  on the road from Killesandra to Scrabby, near the point of junction of the three counties of Cavan, Leitrim, and Longford, and was formed by the disunion of thirty townlands from the parish of Killesandra. Near the town is the lake of Scraba, one of the sources of the river Erne, which, with the lakes through which it runs, is commonly called in its entire extent Lough Erne. The market is on Friday, and is well supplied with provisions: the market-house, situated in the centre of the town, was built by the Earl of Gosford, to whom the town belongs. Fairs are held on Jan. 28th, March 25th, April 1st, May 2nd, June 8th, Aug. 8th, Sept. 23rd, Nov. 1st, and Dec. 23rd. Here is a station of the constabulary police. The living is a perpetual cure, in the diocese of Kilmore, and in the patronage of the Vicar of Killesandra: the perpetual curate has a fixed income of £75 per annum late currency, of which £50 is paid by the incumbent of Killesandra, and £25 from the funds of the Ecclesiastical Commissioners. The church was built by aid of a gift of £900 and a loan of £100, in 1819, from the late Board of First Fruits. The glebe-house is small but conveniently built; and the glebe comprises 21 acres. In the R. C. divisions this parish remains included in the union or district of Kil- lesandra, and has a chapel, situated at Corronee. There is a place of worship for Wesleyan methodists. There are two public schools, one in the town and the other at Corronary, and other private and Sunday schools in the parish. 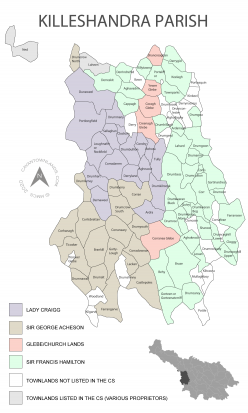 1976 Breifne article by Rev. Gerard Alwill on the 1841 Killeshandra census

Read the 1976 article by Rev. Gerard Alwill on the 1841 Census which was held on the night of 6 June of that year. Return sheets were to be filled in that night by the head of each household.

END_OF_DOCUMENT_TOKEN_TO_BE_REPLACED

On this page, you can search all records from the 1841 census of the parish of Killashandra. Use the filter at the top of each column to reduce the data.

END_OF_DOCUMENT_TOKEN_TO_BE_REPLACED

Towns and Townlands in Killashandra