KILLINAGH, a parish, in the barony of TULLAGHAGH, county of CAVAN, and province of ULSTER, 7½ miles (E. by S.) from Manor-Hamilton, on Lough Macnean; containing 5383 inhabitants. It comprises, according to the Ordnance survey, 24,783¾ statute acres, including 982¾ under water, of which 42¾ are in Lower and 806¼ in Upper Lough Macnean. The living is a vicarage, in the diocese of Kilmore, and in the patronage of the Bishop; the rectory is impropriate in Major Saunders, and the tithes amount to £290. The church was erected in 1786, by aid of a gift of £390 from the late Board of First Fruits, and the Ecclesiastical Commissioners have recently granted £163 for its repair. The R. C. parish is co-extensive with that of the Established Church, and has a chapel at Killinagh, and one at Doobally. There is a place of worship for Primitive Methodists. About 320 children are educated in three public, and 310 in seven private, schools, and there is a Sunday school. 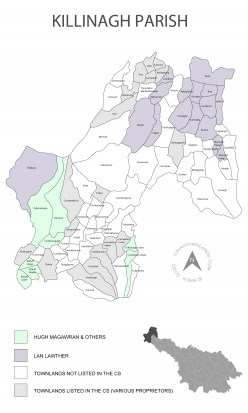