KINAWLEY, a parish, partly in the barony of TULLAGHAGH, county of CAVAN, partly in that of GLENAWLEY, but chiefly in that of KNOCKNINNY, county of FERMANAGH, and province of ULSTER, 6 miles (N. W.) from Ballyconnell, on the road to Enniskillen; containing, with the post-town of Swanlinbar, which is separately described, 16,077 inhabitants. According to the Ordnance survey it comprises 51,004 statute acres, of which 15,346½ are in the county of Cavan; and, including islands, 35,657½are in the county of Fermanagh; of the latter number, 2895 acres are in Upper Lough Erne, and 645¼in small loughs. Agriculture is in a good state; there is a considerable quantity of bog, and limestone and freestone are abundant. Cuilcagh mountain, which, according to the Ordnance survey, is 2188 feet high, is in the Cavan part of the parish. The river Shannon rises at the base of this mountain from a deep circular gulph, 20 feet in diameter, and there is another deep gulph about three-quarters of a mile from this, in which the flowing of water may be heard. The elevation of the source of the Shannon above Lough Allen is 115 feet, and above the sea 275 feet. Petty sessions are held every fortnight at Derrilin, where fairs are held on May 27th and Oct. 27th. The principal seats are Mount Prospect, the residence of Blaney Winslow, Esq.; Dresternan, of D. T. Winslow, Esq.; Prospect Hill, of A. Maguire, Esq.; and Cloghan, of D. Winslow, Esq. The living is a rectory and vicarage, in the diocese of Kilmore, and in the patronage of the Bishop; the tithes amount to £369. 4.7½. The glebe-house was erected in 1822, by aid of a loan of £787 from the late Board of First Fruits. There is a church at Derrilin, and one at Swanlinbar, which is in a ruinous state. In the R. C. divisions the parish forms two unions or districts, called Kinawley, in which are chapels at Kinawley and Swanlinbar; and Knockaninny, in which are chapels at Knockaninny, Glassmullen, and Drumderrig. There are eight public schools, in which about 850 children are educated, and 13 private schools, in which are about 570, also seven Sunday schools. 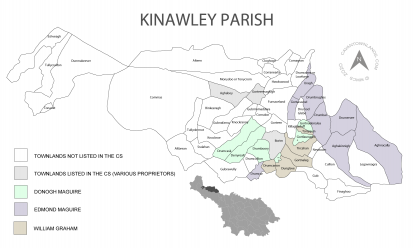 Towns and Townlands in Kinawley