LOGHAN, or LOUGHAN, a parish, partly in the barony of CASTLERAHAN, county of CAVAN, and province of ULSTER, but chiefly in the barony of UPPER KELLS, county of MEATH, and province of LEINSTER, 4 miles (N. W.) from Kells, on the road from Dublin by Kells to Enniskillen; containing 3795 inhabitants, of which number, 339 are in the village of Loghan. This parish, which is also called Castlekeiran and Tristelkerin, contains also the villages of Rathendrick, Derver, and Castlekeiran, and is situated on the river Blackwater, near its source in Lough Ramor. It is a rectory, in the diocese of Meath, entirely impropriate in the Marquess of Headfort: the tithes amount to £250. The impropriator allows £10 per annum to the curate of Mounterconnaught parish for performing the occasional duties of that part of Loghan which lies in the county of Cavan, and of which the Protestant inhabitants attend Virginia church: those of the Meath portion attend the church of Kells. In the R. C. divisions Loghan forms part of the union or district of Carnaross, or Dulane. At Edenburt is a national school of about 60 children, aided by the Marquess of Headfort; and at Carnaross is a private school of about the same number. On the banks of the river are the remains of a small church, dedicated to St. Kieran, with a large and richly sculptured stone cross in the cemetery; here is also a holy well, much resorted to by the peasantry on the first Sunday in August. 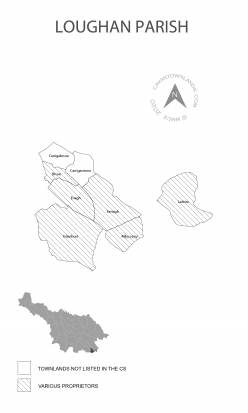 Towns and Townlands in Loughan or Castlekeeran