LURGAN, a parish, in the barony of CASTLERAHAN, county of CAVAN, and province of ULSTER, on the road from Kells to Cavan; containing, with the post-town of Virginia (which is separately described), 6387 inhabitants. It comprises, according to the Ordnance survey, 11,327¾ statute acres, including 922¾ acres of water, of which the greater portion is in Lough Ramor; 8423 acres are applotted under the tithe act, and there is a large portion of bog and moor. In 1831, two townlands were separated from this parish to form part of the district parish, or perpetual cure, of Ballyjamesduff. The living is a rectory and vicarage, in the diocese of Kilmore, united by act of council to the rectory and vicarage of Munterconnaught, together constituting the union of Lurgan, in the patronage of the Bishop. The tithes amount to £233. 9.0, and the gross tithes of the benefice to £381. 9.0: the glebe of the union, which comprises 999¼ acres, is valued at £694. 2. 6. per annum. The glebe-house, situated about two miles from the church, was erected about 1814, at an expense of £3276. 18. 5¼., of which £1384. 12. 3¾. was granted as a loan, and £92. 6. 1¾, as a gift from the late Board of First Fruits. The church, in the town of Virginia, was erected in 1821, at a cost of £2492. 6. 1¾., of which £1846. 3. 1. was a loan from the same Board, and the remainder was contributed by the parishioners; having been accidentally burnt in the winter of 1830, it was repaired by subscriptions amounting to £900, contributed chiefly by the bishop and the parishioners. In the R. C. divisions the parish forms the head of a union. or district, comprising also part of the parish of Loghan. in the diocese and county of Meath, and containing the chapels of Lurgan and Maghera. In the national schools at Whitegate, Caponagh, and Lattoon, and a school aided by subscriptions, about 360 children are educated; and there are four private schools, containing about 290 children. 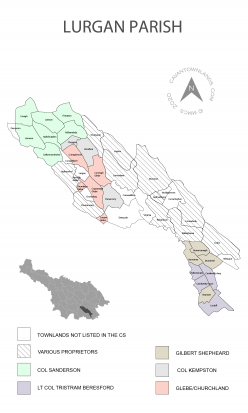 Lurgan parish, an edited transcription of the 1821 Census

James L. Brady’s transcription of the 1821 Census of the parish of Lurgan

END_OF_DOCUMENT_TOKEN_TO_BE_REPLACED

Towns and Townlands in Lurgan