BAILIEBOROUGH, or MOYBOLOGUE, a market and post-town, and a parish, partly in the barony of LOWER KELLS, county of MEATH, and province of LEINSTER, and partly in that of CASTLERAHAN, but chiefly in that of CLONKEE, county of CAVAN, and province of ULSTER, 11½ miles (N. W. by N.) from Kells, and 42¼ miles (N. W.) from Dublin; containing 10,480 inhabitants, of which number, 1085 are in the town. This town is situated on the road from Cootehill to Kells, and consists of only one street, containing 165 houses. The market is the largest in the county, and is on Monday. Fairs are held on Feb. 17th, May 17th, June 15th, Aug. 14th, Oct. 14th, and Nov. 17th. The Hilary and Midsummer general quarter sessions are held here: the court-house was enlarged and improved in 1834. The bridewell was built in that year, and contains five cells and two yards, with separate day-rooms and yards for female prisoners. A manorial court is held yearly; and here is a station of the constabulary police.
In the incumbent’s title this parish is denominated Moybologue, otherwise Bailieborough: it was formed by act of council in 1778, by separating from the parish of Killan, now called Shercock, 29 townlands, including the town of Bailieborough, and uniting them to the parish of Moybologue. It comprises 17,152 statute acres, as applotted under the tithe act. The land is generally of good quality: that part of the parish which is in the county of Meath is cultivated for all kinds of grain. Several small bogs are scattered over its surface, which are diminishing in extent either by draining or digging for fuel. There are some quarries of an inferior kind of stone, chiefly used for building, and about a mile from the town is an extensive bleach-green, with a comfortable house and small demesne, the residence of W. Spear, Esq. Bailieborough Castle, the seat of Sir Wm. Young, Bart., is situated in a fine demesne, and occupies the site of an ancient fortress described in Pynnar’s Survey, under the head of Tonregie, as a vaulted castle, with a bawn 90 feet square, and two flanking towers, attached to which were 1000 acres of land: this ancient castle remained standing till within a few years, when it was pulled down to make room for additions and improvements in the present house. Near the town also are Bexcourt, the seat of the Rev. E. Mahaffy; and the glebe-house, the residence of the Rev. J. Gumley. The living is a united rectory and vicarage, in the diocese of Kilmore, and in the patronage of the Bishop. The tithes amount to £553. 1.0, of which £314. 1.0 is payable by the Moybologue portion of the parish, and £239 by the townlands added to it. The old church being a dilapidated building, a new one is in course of erection. The glebe-house was built by a gift of £100 and a loan of £900, in 1811, from the late Board of First Fruits; the glebe consists of two farms near the church, comprising 117 acres, and 43 acres of bog. In the R. C. divisions the parish is partly in the union or district of Killan or Shercock, and partly in that of Kilmainham and Tivorcher: the chapel of the former is situated in the town of Bailieborough; and that of the latter, which is in the county and diocese of Meath, at Tivorcher. There are two meeting-houses for Presbyterians; one in connection with the Synod of Ulster, of the third class; and the other in connection with the Seceding Synod, of the first class. The Wesleyan Methodists have also a place of worship, in which divine service is performed every alternate Sunday. The parochial school, at Lisnalea, is supported by the incumbent; and there are three other public schools, in which 180 boys and 110 girls are taught, and a school is in progress at Kellan. There are 13 private schools, in which are about 500 boys and 250 girls. A dispensary was established in 1822. 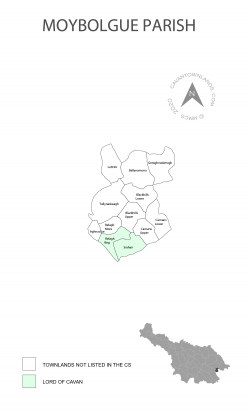 Towns and Townlands in Moybolgue