MULLAGH, a market town and parish, in the barony of CASTLERAHAN, county of CAVAN, and province of ULSTER, 6 miles (N. N. W.) from Kells, on the road to Bailieborough; containing 5960 inhabitants, of which number, 108 are in the town. This parish is situated on the confines of the county of Meath, and comprises, according to the Ordnance survey, 12,873 statute acres, of which 140¾ are water, and there are large tracts of bog and mountain; the general quality of the land is good. There is abundance of stone for building; some slate is found on the glebe, and coal exists, but is not worked. The town, which consists of 36 houses, is a constabulary police station, and petty sessions are held on alternate Fridays. It has a weekly market; and fairs for the sale of cattle and pigs, oats, butter, and flax, are held on Jan. 29th, March 25th, May 27th, July 29th, Sept. 30th, and Nov. 25th. Here is a dispensary. The principal seats are Lake View, the residence of -Mortimer, Esq.; Quilca House, of the Rev. Luke O’Reilly; and the glebe-house, of the Rev. Atkinson Caffrey. The living is a perpetual curacy, in the diocese of Kilmore, and in the gift of the Incumbent of Killenkere. The income of the perpetual curate is £78. 2.0, of which £55 is payable by the vicar of Killenkere, and £23. 2.0 from the Ecclesiastical Commissioners, out of Primate Boulter’s fund: he has also the glebe, comprising 20 acres, and valued at £20 per annum; and the glebe-house, which was built by aid of a gift of £450, and a loan of £50, in 1822, from the late Board of First Fruits. The church is a neat structure in good repair, built in 1819, at an expense of £1107, being a loan from the same Board. The R. C. parish is co-extensive with that of the Established Church, and contains two chapels, one at Cornakill, and one at Chapel-Cross. There are meeting-houses for Presbyterians and Independents. There are four private schools, in which about 290 children are educated; and a Sunday school. Ruins of an ancient church and of a chapel of ease exist. The site of the castle on the western side of the lake is now occupied by the cottage of Mrs. Finlay; the castle was destroyed by Cromwell. Quilca House, in which Dean Swift wrote “Gulliver’s Travels,” and the “Tale of a Tub,” was the residence of Mr. T. Sheridan, father of the Rt. Hon. Brinsley Sheridan. 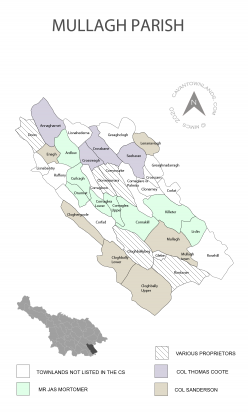