SCRABBY, or BALLIMACKELLENNY, a post-town and parish,in the barony of TULLOGHONOHO, county of CAVAN, and province of ULSTER, 15 miles (S. W. by S.) from Cavan, and 70 (N. N. W.) from Dublin) containing 2668 inhabitants, of which number, 183 are in the town. This small town, which in 1831 contained 40 houses, consists chiefly of one street extending along the road from Arvagh to Granard; it has a sub-post-office to Crossdoney, and fairs are held on Feb. 10th, May 12th, Aug. 1st, and Dec. 12th. The parish comprises, according to the Ordnance survey, 6661 statute acres, of which 1182 are in Lough Gowna; the land is of indifferent quality. It is a vicarage, in the diocese of Ardagh, forming part of the union of Granard: the rectory is in dispute. The tithes amount to £157. 16. 11., of which £87. 13. 10. is payable to the vicar; the remainder is rectorial. The church adjoins the town. 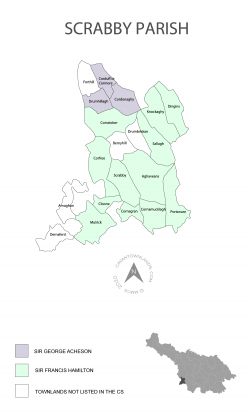 Towns and Townlands in Scrabby