TOMREGAN, a parish, partly in the barony of KNOCKNINNY, county of FERMANAGH, and partly in that of LOWER LOUGHTEE, but chiefly in the barony of TULLAGHAGH, county of CAVAN, and province of ULSTER, on the road from Belturbet to Swanlinbar; containing, with the post-town of Ballyconnell (which is separately described), 4118 inhabitants. This parish, which is situated on the river Woodford, comprises, according to the Ordnance survey, 10,678 statute acres, of which 3200¾ are in the county of Fermanagh, and of the remainder 2256¼ are in Lower Loughtee, and 5221 in Tullaghagh, county of Cavan; 6644 statute acres are applotted under the tithe act, and 275 are under water. The river Woodford has its source in the county of Leitrim, and after reaching Woodford, formerly the residence of the Gore family, and from which it takes its name, passes through two lakes, and becoming deep and broad might at a very trifling expense be made navigable to Lough Erne, a distance of nearly nine miles. The lands are in a very indifferent state of cultivation; a large portion that might be rendered profitable is allowed to remain waste: there is abundance of bog, affording a good supply of fuel. The mountainous parts abound with iron-ore and coal, which might be easily raised, but no regular works have been established, though some of the coal has been sent to Ballyhays, Cavan, and to the great iron-works at Arigna. Slieve Russell, which borders on Fermanagh, and is the highest land in this county, is partly within the parish; it is chiefly waste and barren, the surface being in some parts very rocky, and in others a mere swamp. Lead and silver-ore have been brought down the stream which flows from the mountain of Ortnacullagh, in the vicinity of the parish. There are some quarries of excellent limestone and granite, and marble is also found in some of the townlands; the materials for Cavan court-house, Clancorris castle, and the episcopal palace of Kilmore, were supplied from these quarries. Ballyconnell House, the residence of John Enery, Esq., beautifully situated in a fine demesne on the Woodford river, is within the parish. There are a small bleaching-mill and flour-mill.
The living is a rectory and vicarage, in the diocese of Kilmore, and in the patronage of the Bishop: the tithes amount to£129.13. 4. The glebe-house was built in 1812, at an expense of £1385 British, of which £969 was a loan and £92 a gift from the late Board of First Fruits: the glebe comprises 380 acres, valued at £381. 13. 3., of which 50 acres are bog, and the remainder arable and pasture land. The church was built about 80 years since at the expense of the late Col. Montgomery, and was enlarged in 1820 at an expense of £923 British, of which half was a gift and half a loan from the same Board; it has recently been further improved at an expense of £70, of which £60 was contributed by the Rev. Mr. Carson, and the remainder by the Rev. J. Storey, the incumbent; it occupies a picturesque situation on the road to Ballinamore, and with the adjacent school-house forms a pleasing object as seen from the mountains. In the R. C. divisions the parish is partly in the union or district of Knockninny, and partly in that of Drumlaine, but chiefly in that of Kildallon; the chapel, at Ballyconnell, is a plain building roofed with thatch. There is a place of worship for Wesleyan Methodists. The school-house at Ballyconnell was built at an expense of £227, of which part was defrayed by the incumbent, part by Government, and part from the Ballyconnell estate; it contains school-rooms for boys and girls, and residences for the master and mistress, and is open to the children of all the poor. There are also schools at Cranaghan, Corramore, Mulnagorman, Gorteree, Gortenedden, and Killiwilly, aided by private subscriptions: about 600 children are educated in these schools, and about 70 in two private schools. In the mountains are some curious caves. 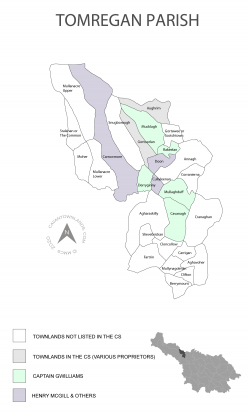 Towns and Townlands in Tomregan