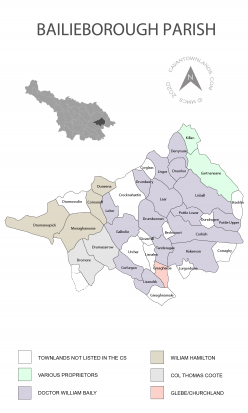 The property of Sir Wm. Young. It contains 322 a. 0r. 29p. statute measure, including 16a. of bog and 1 acre of planting. Farms are from 9 to 25 acres and are let from 18s. to 25s. per acre. It produces oats, barley, potatoes and flax. It contains four carvaghs which pay £1.19s.10d. per carvagh Co. Cess. According to the census of 1831 it contain a population of 64 males and 58 females. There is a trig. station in the N. side of the townland called High Street; it stands on a hill in the planting 665 feet above low water.