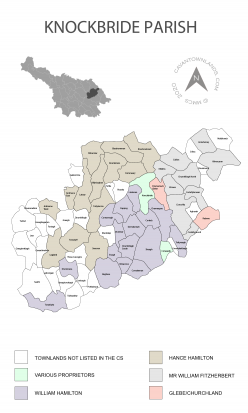 This townland contains 475sq. 0r. 5p. statute, being all cultivated with the exception of 28 acres of bog and 5 of water. Rents are from 28s. to 30s. per acre. It is the property of Sir G. Hudson. There are no farm houses or buildings of any note. The greatest height is Beglieve trigl. station which is 679 feet above the level of the sea, at low water. There are several kilns in it. Lough Nagerman (sic) is in the N. W. portion of the townland, At the N. side of the townland a communication road passes from N. to S. At the E. side of the townland another and at the W. side and forms the Western boundary at the W. side. It contains about 423 inhabitants. Male servants receive £4. 4s. and females £2 per annum.