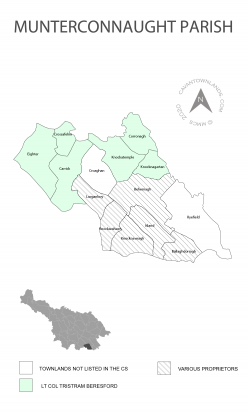 It is the property of the Marquis of Headfort and contains 370 1/2 acres of arable land, 37 of bog and 24 of plantation. The Ferry road passes through it. There are two ancient forts in it, one near the centre, the other near its S.W. boundary. The soil is of a middling quality but very stony. It contains a trigl. point near Lough Ramor, 340 feet above the level of the sea.