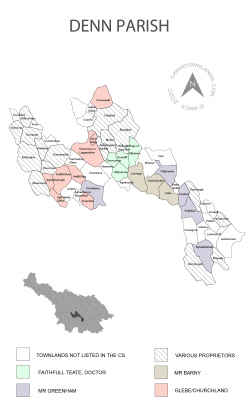 very bad, consisting of rocks. Principally the remainder is much better having a portion of bog, consisting of about 26 acres near the village which lies E. of the townland. There is a Roman Catholic chapel, nearly in ruin in which there is a school. Average number of scholars 50 males, 45 females. All Roman Catholics, who pay the teacher from 1d to 2d. per week.

Towns and Townlands in Denn