URNEY, a parish, partly in the barony of UPPER, but chiefly in that of LOWER, LOUGHTEE, county of CAVAN, and province of ULSTER; containing, with the town of Cavan, 6050 inhabitants. It is situated on the road from Dublin to Enniskillen, and comprises, according to the Ordnance survey, 7934 statute acres, of which 1055 are water, and of these, 530½ are in Lough Oughter: the land is of various qualities, and most of it in a profitable state of cultivation. The living is a vicarage, in the diocese of Kilmore, united by episcopal authority, apparently at an early date, to the vicarage of Annageliffe, and in the patronage of the Bishop; the rectory is partly appropriate to the Dean of Kilmore, and partly to the vicars choral of Christ-Church, Dublin. The tithes amount to £156. 5. 8½., of which £38. 15. 4. is payable to the dean, £6. 7. 1. to the vicars choral, and £111. 3. 3½. to the vicar; the glebes of the union comprise 404½ acres (of which 132¼ are in this parish), valued together at £483. 3. 3½. per ann.; and the gross value of the benefice is £599. 0. 2¼. The church was rebuilt in 1816, for which purpose the late Board of First Fruits granted a loan of £4000, and the remainder of the expense was defrayed by private donations: it is a handsome structure, situated in the town of Cavan. Nine townlands of this parish have been separated from it to form with others the district parish of Derryheen. In the R. C. divisions the parish is the head of a union or district, comprising also the parish of Annageliffe, and commonly called the union of Cavan; there are two chapels, one in Cavan, a handsome edifice, erected at an expense of £2000, and one at Coolboyague, built in 1810. There is a place of worship for Presbyterians in connection with the Synod of Ulster, of the second class; and there are two for Primitive and Wesleyan Methodists. About 370 children are taught in five public schools, of which the Royal endowed school at Cavan is described in the account of that town; one in the town and another at the lodge of Farnham demesne are wholly supported by Lord Farnham, one at Coolboyague is under the New Board, and one at Drumkeen under the Society for Discountenancing Vice. There are also eight private schools, in which are about 270 children; and a Sunday school. There are some remains of a monastery. 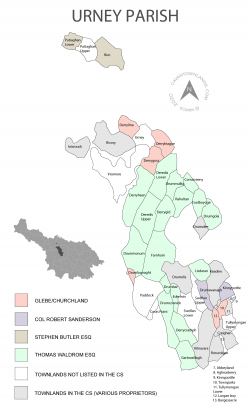 Towns and Townlands in Urney